The Raising of Lazarus

The home of Mary, Martha and Lazarus was a place of hospitality for Jesus, a place where he could relax.  He had no home of his own so this place was quite special for him. So why did Jesus not go straight to Lazarus when he heard that he was ill? Why did he remain for two further days – was it to protect himself and his disciples?  When Jesus talked of going back to Judea, his disciples protested:  ‘Master, only a few days ago, the Jews were trying to stone you to death, are you going there again?’

Then there followed a discussion containing misunderstandings on the disciples’ part.  ‘Are there not twelve hours of daylight?’ replied Jesus.  ‘Those who walk by day will not stumble, for they see by this world’s light. It is when they walk by night that they stumble, for they have no light.’  Darkness and night represents life without Christ, life dominated by evil.  At the last supper, after Judas received the sop, he went out and ‘it was night’ (John 13 v 30).  Earlier in John’s gospel, Jesus described himself as the light of the world.  There are twelve hours of daylight; lots of time at present with things being cancelled, time to think and reflect, like on an extended retreat! Time to reflect on what it means for Jesus to be the light of the world, particularly in the situation we are in.

After a pause, Jesus said to his disciples ‘Our friend Lazarus has fallen asleep, but I am going to wake him up’. Here the disciples took the word sleep to mean sleep, but Jesus took it to mean death. Jesus then spoke to them quite plainly ‘Lazarus has died, and I am glad that I was not there – for your sakes, that you may learn to believe.  And now, let us go to him’.  This prompted Thomas to say to his fellow disciples ‘Come on, then, let us all go and die with him’ perhaps with a sigh of resignation, showing his loyalty, but despairing at the situation. I thought that this phrase in the Phillips translation ‘that you may learn to believe’ was a very apt one.  Sometime it takes a crisis, or a very difficult situation to challenge and develop our faith. The death of Lazarus presented a crisis to Jesus, but for Him every crisis became a Kairos moment, a moment of spiritual opportunity.

When they arrived in Bethany, it was Martha who met them, always one for action, but she chided Jesus with the ‘If’ word -‘if you had been here my brother would not have died, but I know that even now God will give you whatever you ask’.  Jesus said to her ‘Your brother will rise again’. Martha then stated her belief in the resurrection at the last day, which prompted Jesus to say ‘I am the resurrection and the life’ (one of the seven ‘I am’ sayings in John’s gospel). Martha then declared her belief in Jesus as the Christ, the son of God.  She then fetched Mary who posed the same ‘If’ question to Jesus. Mary’s weeping and the Jews weeping (in some versions of the Bible, the word condole is used), affected Jesus, who was deeply moved and visibly distressed. Then there is the shortest verse in the Bible: ‘Jesus wept’. Jesus showed us a God whose heart is wrung with anguish. In the Hymn by Timothy Rees ‘God is love, are the words:
‘and when human hearts are breaking under sorrow’s iron rod,
all the sorrow, all the aching, wrings with pain the heart of God.

Jesus then arrived at the tomb of Lazarus – ‘Take away the stone’ he said. After a protest from Martha, as the body had been in the tomb for four days, they remove the stone.  I remember seeing the ‘Oxford Passion’ by Creation Theatre Company in 2007, a modern rendition of a mystery play, and in a review I wrote these words ‘The outrageous action of opening the tomb in the portrayal of the raising of Lazarus took us way beyond our comfort zone, something that the written words in the gospel are not able to do in quite the same way.’
Jesus prayed to God before saying ‘Lazarus, come out!  When Lazarus came out, Jesus said ‘unbind him and let him go’. 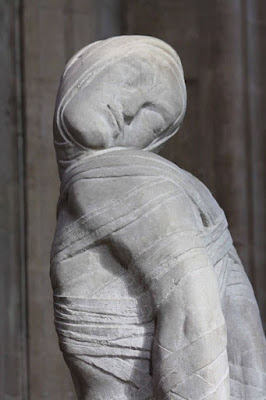 The sculpture of Lazarus by Jacob Epstein is in New College chapel in Oxford. (Chris and I used to go there occasionally for evensong when we wanted a change from ‘happy clappy’ Baptist worship!)  I found the sculpture quite disturbing, because as a child, with anything to do with death, one was supposed to avert one’s eyes.  This sculpture drew me, I wanted to stare at it, yet I felt it was not allowed. Epstein’s work reached deep into the human psyche, and seeing this sculpture of Lazarus was said by Khrushchev to be ‘the sort of thing that gave him nightmares’.
Looking at the statue of Lazarus, it would appear that there is something comfortable about the familiar even if you are half dead. It also looks as though Lazarus is turning towards Jesus even though his eyes are still shut. Jesus wants us to be fully alive in him, even though that may mean moving out of our comfort zone, into the unknown.

On this Passion Sunday, the account of the raising of Lazarus shows us a picture of the raw emotions around death and resurrection. It gives us a foretaste of the death and resurrection of Jesus which we shall be thinking about in a couple of weeks’ time. May it give us food for thought during this time of social isolation due to the coronavirus.
‘When our hearts are wintry, grieving, or in pain,
Your touch can call us back to life again,
Fields of our hearts that dead and bare have been:
Love is come again, like wheat that springs up green.’ 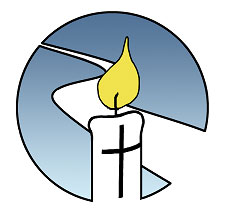